← Griffin House Charles Pellerin: "A New Physics in Our Lifetime?" →

To keep the music playing during this unpredictable time, we are requiring all patrons and staff to wear a mask while attending events at Chautauqua. To read more, click here. Brandon Wolf is an activist, changemaker, and thought leader on issues of LGBTQ equality, gun safety, and progressive politics. A survivor of the 2016 Pulse Nightclub shooting in Orlando, Brandon has committed his life to honoring victims of injustice with action. He is a frequent face on MSNBC and CNN and a featured voice in CNN digital, Newsweek, USA Today, and others. Brandon has graced the cover of Dazed Magazine and LGBTQ publications nationwide. He has been recognized as one of Huffington Post’s 30 LGBTQ Influencers under 30, Business Equality Magazine’s 40 LGBTQ Leaders Under 40, and a Monette-Horwitz Trust Awardee. Brandon was a national surrogate for Senator Elizabeth Warren’s Presidential Campaign and an advisory committee member for President Biden’s General Election bid. He is a cofounder, Board Member, and current Vice President of The Dru Project, a nonprofit organization that creates safe spaces in schools for LGBTQ youth, provides college funding, and enables champions in the fight for equality.Colorado Ceasefire has been working for freedom from gun violence since 2000. Ceasefire initiated and was instrumental in the enactment of the 2013 Colorado firearms laws, which included universal background checks, a high-capacity magazine ban, and domestic violence firearms relinquishment. Ceasefire began advocating for Extreme Risk Protection Orders in 2016, which became law in 2019, and was instrumental in introduction and enactment of six gun violence prevention bills in 2021.If you would like to donate to the  Colorado Ceasefire, please do so HERE.*All tickets subject to service fees 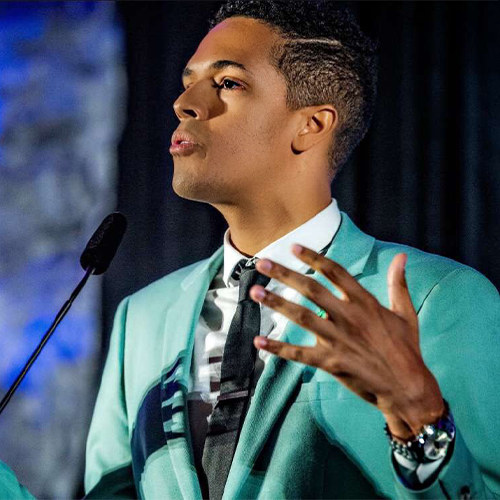 ← Griffin House Charles Pellerin: "A New Physics in Our Lifetime?" →