Moved and inspired by artists such as Bonnie Raitt, Linda Ronstadt, and Janis Joplin, Lauren Monroe developed a style producers, musicians, and rock historians have compared to those legendary women of rock and blues. Her sound and vocal quality — raw, sawdust-on-the-floor honesty — combined with the emotional and spiritual power of her performance draws audiences in, invigorates, and speaks to us on so many levels.

MESSAGES FROM APHRODITE, Lauren Monroe’s third album—and her second in collaboration with acclaimed producer Jim Scott—widens the aperture opened by its predecessor, 2021’s Under the Wolf Moon, bringing her musical and spiritual vision into even sharper focus. The title, which references the ancient Greek goddess of love in its myriad aspects, signifies the emotional expanse of Monroe’s songs, to which she brings a rarefied degree of insight and compassion, enabling her to nimbly plumb the depths and scale the heights of the human condition in her songwriting.

That may sound like a tall order, but Monroe is singularly well-equipped to handle it. The New York-born, California-based polymath conducts parallel careers as a gifted singer-songwriter and a renowned mental-health advocate. She approaches these intertwined roles with equal passion, her nuanced understanding of human behavior informing her music, which she sees as “a heart-based experience” that is “not just about listening—it’s about feeling and connecting.”

Scott, who’s worked with more than his share of legends over the years, bears witness to Monroe’s alchemy. “Lauren is a special artist,” he asserts. “She’s tuned in to the spiritual workings of the heart and the mystical nature of the universe. She’s an empath, a healer, a teacher, visual artist, producer and songwriter; I also think she’s a time-traveler. Her songs guide, direct and uplift and are sonically beautiful.”

Monroe draws on her deep well of accrued knowledge in her songs, which she delivers in a luminous alto that resonates with empathy. Her experiential lyrics, emotionally authentic and free of pretense, are embedded in vibrant folk-rock settings, immediate in their impact and timeless in their sound.

The buoyant roots rockers “Kiss Me Now” and “Dream Again,” the lilting shuffle “Beautiful World” and “If You Want,” with its old-school Americana groove and splash of Southern soul, would slide seamlessly into a 1970s playlist featuring Fleetwood Mac, Linda Ronstadt, Jackson Browne and Bonnie Raitt. The unmistakable parallels between rock’s halcyon days and Monroe’s music are rooted in her neoclassic songcraft, replete with ecstatic, harmony-laden chorus hooks and imbued with the unfettered joy of being alive and in the moment.

Monroe wrote “Kiss Me Now,” the lead single, in a matter of minutes, as if it had been beamed down to her gift-wrapped. “The message of the song,” says Lauren, “is kiss the person you love now, because as we all know, life is very unpredictable and there’s no guarantee that they’ll always be there. So it’s a celebratory song that reminds us to be grateful and to never take our time together for granted.”

“Big Love Lullaby,” a gentle reimagining of one of Under the Wolf Moon’s linchpin songs, serves as a bridge between the companion-piece LPs. “A ballad version of ‘Big Love’ wasn’t something I premeditated,” Monroe acknowledges, “but a whisper can sometimes reach into the heart deeper than an exclamation. This new version has the same words and meaning as the original, but it’s a more intimate expression that came from a moment of reflection, as I sang the words to myself: ‘Everybody’s fine living in anger/From sunset to dawn, we’re taking it home.’”

Scott is proud of what they’ve accomplished together. “All the incredible musicians on the project brought our vision to life and helped create wonderful pieces of music that speak to the heart and soul,” he says.

Monroe and Scott met in 2018, after the manager of one of the producer’s clients caught her performing at Hollywood’s Hotel Café. Impressed by her songs and singing, she approached Monroe after the set and offered to hook her up with Scott. Monroe was aware of Scott from his work with Tom Petty, one of her favorite artists, and when they met, they immediately clicked.

Their ongoing studio collaboration has been—and continues to be—enormously fruitful, yielding not only the two albums but a number of additional tracks too inviting to be categorized as mere outtakes. “Since we first got together, I’ve been sending Jim iPhone demos of songs as I write them. So now we have an abundance of tracks, and I’m thinking of releasing some of them as singles in 2023—songs that didn’t fit on the new album because they’re so rocking or outside of the box that they’d throw off the balance.”

Those outtakes must really kick ass, given the visceral impact of the hardest-hitting tracks on Messages From Aphrodite, notably an electrifying rendition of Lucinda Williams’ “Can’t Let Go” and Monroe’s smoldering “Void of Course”; both are powered by Allmans-style double drumming from Allen and Goodfellow and topped off by Monroe’s urgent vocals. The latter track derives its Physical Graffiti-like exoticism from the droning of a djembe played by Monroe, further deepened by the bowed cello and upright bass of Steve Uccello and lightning-flash guitar riffs of Tyler Bryant. These sounds deepen the mood of the astrology-inspired lyric—“void of course” is a term that refers to the moon’s transition away from one planet and toward another, functioning as a metaphor for disconnection.

Interestingly, each of these songs examines the push-and-pull of a romantic relationship turned toxic that nonetheless continues to hold a seductive grip on its protagonist. Indeed, the need to let go of what Monroe describes as “unhealthy narratives about ourselves” in a quest to “see ourselves clearly, accepting our imperfections and humanness” is one of the album’s overarching themes.

Another is easing the pain of loss, which Monroe addresses directly in the elegiac ballads “Sparrow” and “Gold.” “Most of the songs I write are empathetic, but ‘Sparrow’ specifically concerns dealing with grief,” she says. “That’s also what ‘Gold’ is about. During the pandemic, I kept hearing about families unable to be with their loved ones—husbands and wives, parents and siblings—as they spent their last days on a ventilator and died in a hospital bed, completely alone. In those horrible circumstances, the pain is overwhelming. So when I wrote this song, I cried with them—every person who had to say goodbye over the phone. Because from my experience the only way to get through the pain of loss is to experience it deeply with love and support, not run away from it. To me, music has always been a way through, a guide, a messenger from the other side.”

When Monroe and Scott were brainstorming outside material that echoed the messages of her own songs, she immediately thought of Jane Siberry’s “Calling All Angels,” whose narrator seeks divine intervention in hopes of coming to terms with heartbreak. “If you could/Do you think you would trade it all/All the pain and suffering?” Siberry asks. “But then you’d miss the beauty of the light upon this earth/And the sweetness of the leaving.”

“I’ve taught hundreds of healing workshops over the years, and ‘Calling All Angels’ is one of the songs I always use,” Monroe points out. “Jane Siberry is a very theatrical singer, and I wanted to put my own spin on it—give it a more rootsy feel. But by putting it on the record, I also wanted to show people what an incredible songwriter she is.”

“My Love” dates back to Monroe’s debut album, 2008’s The Freedom Sessions, a family affair produced by Allen five years after they married. Americana mainstay Stoll Vaughan, who co-wrote the song with Lauren, plays acoustic and electric guitar on this shimmering new take, which features evocative pedal steel accents from Greg Leisz. She was inspired to write the lyric after Rick went on tour. “He’d left his boots by the front door,” she recalls. “I sat on the stairway taking in the feeling and questioned what I would do if he didn’t come home.

“My mind then went to the hearts of military spouses and families of soldiers who are in combat far away from home; how strong they need to be to live without certainty of the person they love coming back to them. The lyrics came with a strong sense of the silent strength that nature gives me, the connection to something greater, so that I can carry on and move forward in the face of tragedy with openness and purpose.”

Monroe brings increased awareness of issues like this one not only with her words but with her actions. Earlier this year, she and Allen played some intimate East Coast club dates during which they also displayed their mixed-media art, which was then auctioned online to benefit the couple’s Raven Drum Foundation, whose mission is to serve, educate and empower veterans dealing with PTSD and combat trauma, people in crisis and other at-risk individuals. 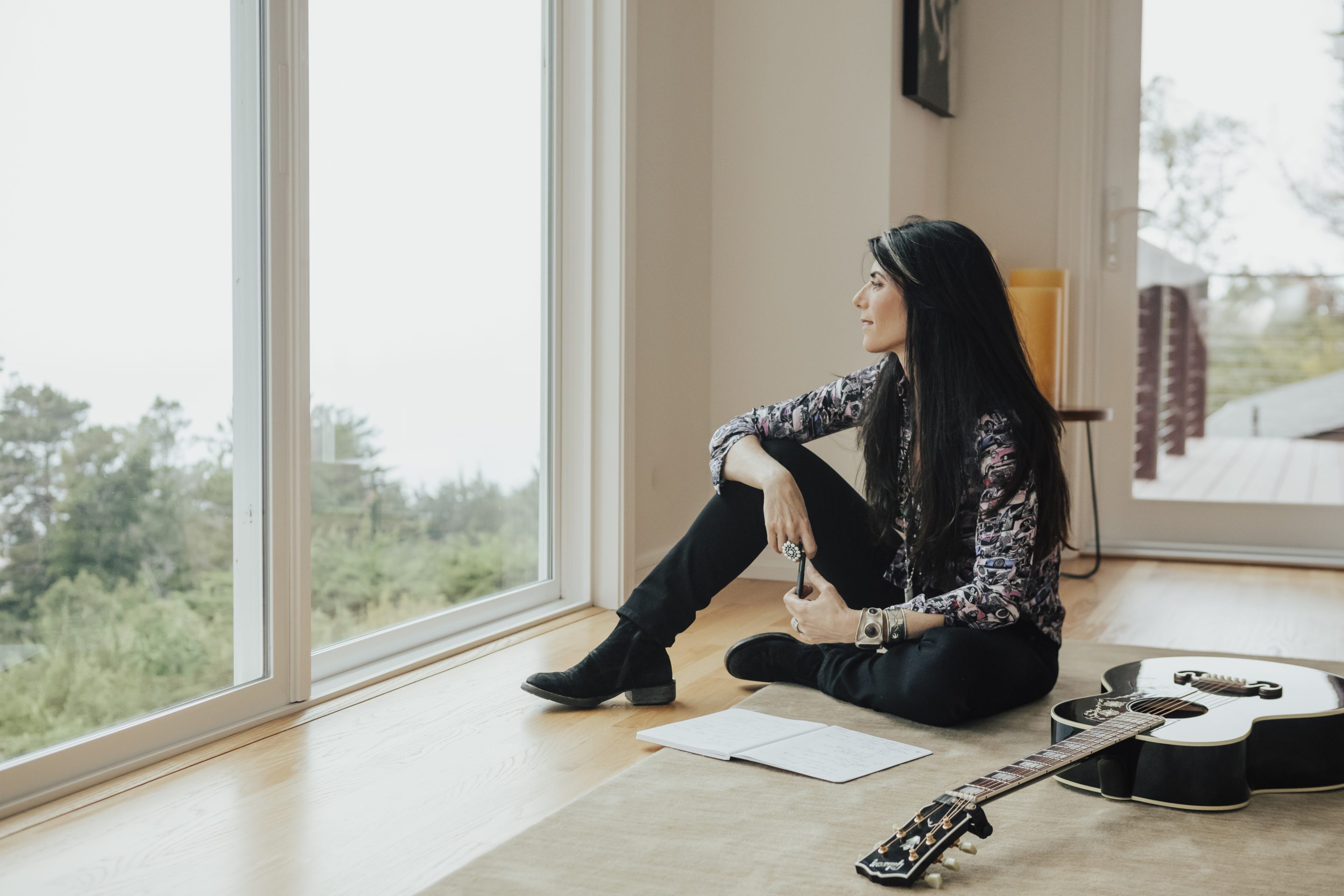