With Support from KUNC

Boulder Ballet presents an evening of contemporary bliss. On this second night of fall, we will present four distinct choreographic voices, that each have their own story to tell. We are proud to present Junk Duet, a lighthearted work by Twyla Tharp, as part of our program for this evening. This will be the first time that Boulder Ballet brings a work by the legendary Twyla Tharp to the stage.

In addition, we will present two world premieres, one by Jacob Mora of Moraporvida and a second by our own Artistic Director. A Denver-based artist, Jacob Mora works not only with the exploration of relationship as a theme but with the merging and fusion of culture, sound, and imagery. This work will be an exciting addition to Boulder Ballet’s repertoire.

We’ll hope to have you join us to celebrate the opening of our 2022/2023 season with an evening of dance at Boulder’s iconic Chautauqua Auditorium.

Junk Duet was commissioned by Alexander Kølpin for the Sommerballett Festival in Denmark. He performed the classically structured pas de deux with Stacy Caddell. The duet was later included in Known By Heart, commissioned by American Ballet Theatre. Tharp pits the two dancers against one another in a cartoonish competition. The percussive score by Donald “The Junkman” Knaack is played on 100% recycled materials. The scrapheap sounds enhance the comedic blend of exaggerated pantomime and classical ballet vocabulary. The ballerina dominates her partner until he cowers behind her henpecked and she takes her final bow.

Since graduating from Barnard College in 1963, Ms. Tharp has choreographed more than one hundred sixty works: one hundred twenty-nine dances, twelve television specials, six Hollywood movies, four full-length ballets, four Broadway shows and two figure skating routines. She received one Tony Award, two Emmy Awards, nineteen honorary doctorates, the Vietnam Veterans of America President’s Award, the 2004 National Medal of the Arts, the 2008 Jerome Robbins Prize, and a 2008 Kennedy Center Honor. Her many grants include the John D. and Catherine T. MacArthur Fellowship. She is a member of the American Philosophical Society, the American Academy of Arts and Sciences, and an Honorary Member of the American Academy of Arts and Letters. In 1965, Ms. Tharp founded her dance company, Twyla Tharp Dance. Her dances are known for creativity, wit and technical precision coupled with a streetwise nonchalance. By combining different forms of movement – such as jazz, ballet, boxing and inventions of her own making – Ms. Tharp’s work expands the boundaries of ballet and modern dance. In addition to choreographing for her own company, she has created dances for The Joffrey Ballet, American Ballet Theatre, The Paris Opera Ballet, The Royal Ballet, New York City Ballet, The Boston Ballet, The Australian Ballet, Hubbard Street Dance Chicago, The Martha Graham Dance Company, Miami City Ballet, Pacific Northwest Ballet, Atlanta Ballet and Royal Winnipeg Ballet. Today, ballet and dance companies around the world continue to perform Ms. Tharp’s works. In 1992, Ms. Tharp published her autobiography PUSH COMES TO SHOVE. She went on to write THE CREATIVE HABIT: Learn it and Use it for Life, followed by THE COLLABORATIVE HABIT: Life Lessons for Working Together. In 2019, her fourth book was published, Keep It Moving: Lessons for the Rest of Your Life. Today, Ms. Tharp continues to create.

Jacob Mora works in Dance, Theatre, Film, Fashion and Music with projects ranging from performance, education or the creating, directing or producing of exciting and provocative art. Jacob is the Artistic Director and Founder of Moraporvida Contemporary Dance (MPVCD). A company based and rooted in the relationships and voices that define us and speak for us. As an artist, Jacob works not only with the exploration of relationship as a theme but with the merging and fusion of culture, sound, and imagery. The convergence creates a distinct voice that has defined many of the works within the repertory and abroad. Jacob Mora has created a unique repertory of work that includes dances, shorts and concerts that have seen critical acclaim and awards among many platforms.

With a large repertory of dances among the community and MPVCD, Jacob has also set works on other dance companies and organizations including Ormao Dance, Kaleidoscope Dance Theater and other regional dance groups. He created many original evening length productions and has directed many shows that span from the avant-garde to the corporate, popular and steamy including, The Last Click, A Landing Place and Exhibit M. Jacob currently is on faculty with Metropolitan State University, Sweatshop Dance & Cleo Parker Robinson Dance. He has been on faculty with the University of Wyoming and has done guest work & residencies with many other University programs including UNLV, CU, WOU, and CSU among many.

Jacob Works as a fierce advocate for dance within Modern, Contemporary, Jazz and Hip Hop Traditions. He has conducted workshops and classes for hundreds of programs, businesses and schools, ranging from elementary to senior programs. Jacob works with students to deepen a relationship with dance and the arts through technique classes, lecture, demonstrations, and performances. After graduating from the University Of Northern Colorado with a BA in Dance and Theater Jacob spent the first part of his career as a performer working with many amazing artists and companies. He has danced with the Cleo Parker Robinson Dance, David Taylor Dance, Hannah Kahn Dance and Santee Smith. Performing repertory and working with choreographers like Gary Abbott, David Dorfman, Milton Meyers, Ron K Brown and David Rousevve to name a few. As a Hip Hop performer he has been a part of groups QG Posse, The Cool Emcees, Static Incision, Bliss Productions & Buggz Brown, opening up for Queen Latifah, All For 1 and still creates works under the Name “Def I”. He has done corporate events for companies such as Starkey, Imprint, Create a Vision, Pro Entertainment and Moments Notice working with many of the bands including Soul X.

Jacob has played hundreds of venues performing for weddings, award ceremonies and runway shows. With a truly diverse group of performance, shows, and experiences, these influences and relationships collide in a body of work that has made Jacob Mora a sought after teacher, artist, performer and choreographer within concert dance and pop dance.

We look forward to premiering the original work Wait less by Jacob Mora at our Fall Passages concert. A Denver-based artist, Jacob brings a unique perspective to the stage creating works based on an idea, often influenced by relationships, media, and pop culture.

Jacob’s creations vary from the avant-garde to more traditional and always aim to centralize the dancers. Patrons at our Fall Passagesperformance will see a work that explores impatience on personal, interactive, and social scales. His organic, virtuosic, and emotional choreography reflects the concept of waiting and its effect on people. Jacob is a fierce advocate for dance within the Modern, Contemporary, Jazz, and Hip Hop traditions and his work is known to reflect these styles.

Another unique feature of Jacob’s work is sound as a big part of his storytelling. Just like layering a painting, he layers and blends sounds. He takes everyday sounds and ideas and puts a different spin on them to enhance the narrative of the work. Most of the score will be edited and compiled by Jacob.

As a dancemaker, Jacob loves to highlight contrasting ideas and opposition as an important part of his work. His world premiere Wait less reflects an optimistic view and he hopes to lift the weight off us and find resolutions.

Mystery is in the air during Artistic Director Ben Needham-Wood’s latest ballet, EviDance. The lines between reality and rumor become blurred at a lavish dinner party when one of the guests ends up dead. Tension builds between the eccentric characters, whether it’s a look or a pointed finger. The audience should keep a keen eye on small, hidden moments that may reveal clues to who is innocent and who is guilty. The first chapter of the mystery will be revealed at Fall Passages on September 24. 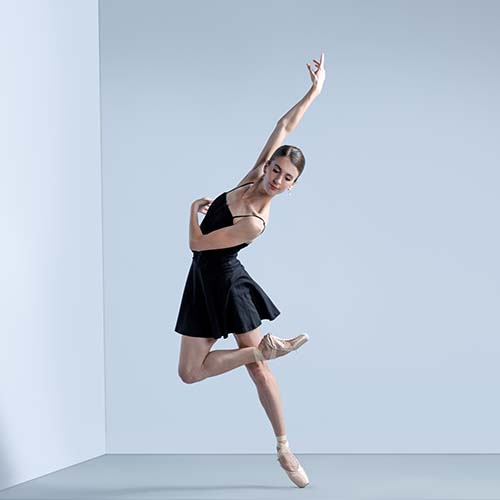