← Robert Cray with A.J. Fullerton The Wailin' Jennys - SOLD OUT! →

Moreover, he has sold out concert halls the world over, produced five PBS television specials and five live CD’s. Not a bad legacy for a guy who never planned to release an album.

“If you had asked me at age 22, I would have said that I would never, never make music for the public,” Jesse Cook says with a laugh. “I would have told you that the public is much too fickle — they may love you one minute and forget you the next. Well, it turns out I did the thing I said I’d never do, and somehow it’s worked out.”

That’s an understatement. Since launching his career with 1995’s Tempest, Cook has blazed an incredible trail. Along with being a global-guitar virtuoso, he’s honed his skills as a composer, producer, arranger, performer and, more recently, filmmaker and cultural ambassador. Surprisingly, he started down many of those paths before he even started school.

As a child he was introduced to flamenco while spending summers at his father’s house in the Camargue region of southern France. John Cook’s neighbour happened to be Nico Reyes, guitarist for The Gypsy Kings. Meanwhile his mother, Heather Cook, with whom he lived, enrolled him in Toronto’s prestigious Eli Kassner Guitar Academy.

Cook’s musical education continued at the world renowned Royal Conservatory, Toronto’s York University and the esteemed Berklee College in Boston. He set his sights on a career as a composer. That was until an Ontario cable TV company aired his music on the listings channel.

“Their switchboard got flooded with calls,” he recalls. “People even got my number somehow and started phoning me at home and asking for a CD. And I was saying, ‘I don’t have a CD, I’m a background composer guy. I don’t make records.’ “

This proved to be a critical turning point leading Cook to self-produce Tempest at home using an eight-track recorder and one microphone. Then he delivered the initial run of 1,000 CDs from the plant to the distributor in his car. Those humble beginnings quickly sparked a mighty international career.

Canadian television appearances followed and so too did important gigs in the US. If he must point to one it was the 1995 Catalina Jazz Festival where his playing earned a 10-minute standing ovation, sparked mob scenes — “It was like being The Beatles,” he marvels — and prompted one store to order enough copies of Tempest to land it at No.14 in Billboard.

In Poland, his 2004 live album Montreal took the country by storm. In India, he gained fame after one of his songs was plagiarized for a major Bollywood movie. (“In India, that’s allowed,” he explains. “They call it cultural appropriation — it obviously doesn’t mean the same thing there.”) In Iraq, his instrumentals score the nightly news. Elsewhere, they’ve accompanied gymnastics and skating routines at the Olympics.

“In Torino, the Japanese skater and the Russian skater both competed using the same song (Mario Takes A Walk). One of them won. I think I should have got bronze,” he says laughing.

It’s no wonder Cook also jokes that his music “has had a way more interesting life” than he’s had. But lately, that international appeal — reflected in a compositional style that mixes flamenco with everything from classical and jazz to Zydeco, blues and Brazilian samba — has become something he takes more seriously.

“If music can come from around the world and interconnect so beautifully to create this beautiful tapestry, maybe there’s something that music can teach us.”

Over the course of his first twenty -five years making award winning music for a global audience Cook could be forgiven should he contemplate retiring or, as he puts it, ‘hanging out at my cottage dipping my toes in the water.” But the fact is he loves creating music. And, there’s also the matter of some unfinished business interrupted by the pandemic.

“Tempest 25’ the reissue of his debut album (released 25 years prior) had been amongst those pre-Covid plans. So too had been another world tour in support of its release. Cook, like most of us, found himself house bound due to travel restrictions.

“The first year with no touring since my career began. I needed a mountain to climb” Cook quips.

So, Cook got to work producing 23 (and counting) extraordinary solo YouTube videos of his favourite songs in which he played all the instruments, recorded, and filmed himself. The collection is called “Love in the Time of Covid” Not only have they pleased his existing fan base but this YouTube video collection has expanded his worldwide audience who are now craving that soon to be announced world tour.

Jesse Cook, clearly, has many more years of memorable performances ahead of him. 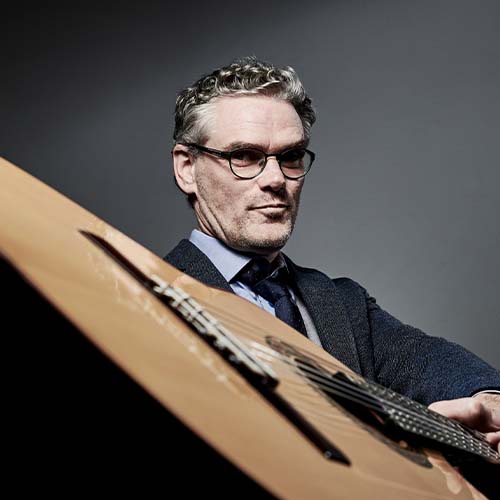 ← Robert Cray with A.J. Fullerton The Wailin' Jennys - SOLD OUT! →